In which I make soap but do no damage to my kitchen.


I melted the 1kg tallow from Tallow 3 over heat low enough to produce no steam or smoke. I combined 120g of slightly lumpy (not completely anhydrous) sodium hydroxide lye and 325ml of water, let it cool, then added it slowly to the warmed liquid tallow.

Very little soap floated to the top, but every time I stirred the mixture, more light colored solids accumulated at the bottom of the pot. I had expected that the soap formed would rise to the top, and indeed some fluffy soap-like curds did come to the top, but the more viscous and cohesive mass stayed at the bottom. The more I stirred, the more formed. I kept the heat at the minimum setting throughout. I ended up with something that looked more like applesauce or loose tofu than soap. 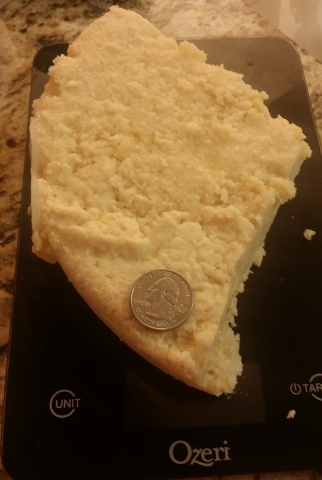 When the stirring produced no further solids, I stopped and turned off the heat, and left it overnight. During the night the saponification completed normally. I ended up with a thick cake with rice-crispie-sized pellets on top, and a very thin layer of clear viscous liquid at the bottom. This cannot be the whole of the glycerin, since it's not even 5ml of liquid. A quick swab with some litmus paper shows it as extremely alkaline, so I assume some of the sodium hydroxide went unused and collected here.

I am not shaping the soap at this point, I'm just setting it aside as large cakes for later use.
Posted by JeffEvarts at 10:17 AM