In which I overcook the tallow

Another trip back to the market, and the butcher generously provided me with 2.1kg of assorted fat. I added the 600g of tallow from Tallow 2 as a heating medium rather than water, and simmered. This produced approximately 1.5kg of tallow total. 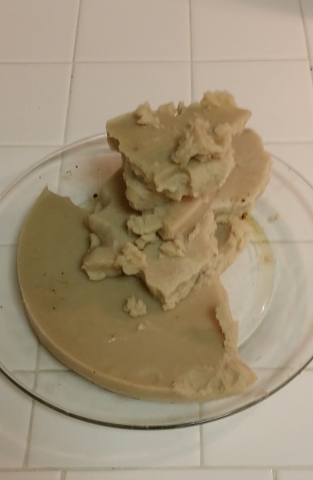 Unlike Tallow 1, I let the rendering continue at a higher temperature well into the browning stage, so the resultant tallow was significantly darker than my previous efforts.

This could be for several reasons:
Or any number of other things.


I remelted the tallow at very very low heat, then let it set. The underside of the tallow contained the majority of the darker mass. I scraped it off, then repeated the process. On this second run there was also a dark mass on the underside. I scraped it off and repeated a third time. On the third run, there was no dark mass to scrape off, nor on the fourth. Apparently the tallow had reached its maximum clarity even though it wasn't white. I had removed a total of 429g of tallow and "dark stuff".


The total yield from the preceding experiment and this one was almost exactly 1kg of tallow. That was less than I had expected.

The tallow, being very very soft, was harder to manipulate and transfer from pot to pot, leaving a fraction of itself behind at each stage. I would hazard a wild guess that 10-15% of the total was lost on the sides of pots and pans or poured out with water.


If I have a large enough batch of fat in the future, I shall try as follows: split it up into four batches, and try low-vs-high temperature, and distilled-vs-tap water.
Posted by JeffEvarts at 2:18 AM